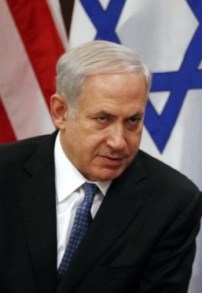 It is said that familiarity breeds contempt. That phrase could have been invented for Bibi Netanyahu and his ambassador in Washington Ron Dermer, in describing their conduct surrounding the invitation – issued behind President Obama’s back – for the Prime Minister to address Congress. It has revealed how in dealing with US neither off both of these supposedly skilled operators sees themselves as outsiders trying the win influence on a foreign field, but rather insiders playing US party politics.

That political storm that began with John Boehner’s invite and Bibi’s eager acceptance continues to rage with mounting ferocity.

In meetings last week, Congressional Democrats (stalwart supporters of Israel) roasted Dermer and accompanying Knesset Speaker Yuli Edelstein for snubbing of the President. Democratic House Minority leader Nancy Pelosi has said that members won’t boycott the speech but that they might also be unable to attend due to their ‘busy’ schedules. Those who have already announced they will be busy elsewhere include Vice President Biden with the most senior serving Senator, Patrick Leahy, along with a clutch of other lawmakers.

Even a few US conservatives have taken umbrage at the disrespect meted out to the President. Fox News – normally a pro-Israel bastion has delivered some harsh criticism in Bibi’s direction.

Netanyahu himself has insisted he will still speak (intimating also that he’ll be doing so for all Jews) due to the need to address the issue of Iran (but of course unconnected to the Israeli election two weeks later). But his stubbornness really speaks of a man whose judgment has become determined by an insatiable sense of his own self-importance and entitlement, at the expense of all other interests.

There is a huge irony the way this drama has unfolded. Netanyahu is judged to be the most ‘American’ of Israeli Prime Ministers. He was picked out in the early 1980’s by then Defence Minister Moshe Arens 1980’s to join the Israeli Embassy in Washington given his flawless US English, and familiarity with all things American. He did after all attend high school in Philadelphia (home also to his accent), went to college at MIT and began his career in the States. Along the way he also picked up some influential contacts. Former Republican Presidential candidate, Mitt Romney was a close colleague from Bibi’s days at the Boston Consulting Group in the 1970’s.

Bibi has a coterie of other contacts and relationships that bind him closely to the Republican Party. Among them Sheldon Adelson, super-donor to Republican causes and backer of many things Bibi (including Yisrael Hayom – a Netanyahu friendly free newspaper). Netanyahu’s most import pollster Arthur Finckelstein who has guided him through many elections, has also worked with a range of Republican candidates including the Old Gipper, Ronald Reagan.

Over and above these relationships there is an ideological affinity that weds Bibi and the current day GOP. They share a world view that sees the world only in black and white and no shades of grey, both on the domestic and international stage; from economics to Iran.

Ron Dermer comes from the same stable as Bibi. His CV reads like that of a Republican staffer, rather than a close adviser to an Israeli Prime Minister. Miami born and raised, Dermer went to work in the 1990’s for a conservative political consultant designing the ‘Contract for America’ a political manifesto authored by (among others) Newt Gingrich. When he did make Aliya a few years later, he brought his Republican baggage (and contacts) to his new home.

Dermer and Netanyahu’s familiarity with all things American (particularly of the Republican variety) has given them a blind spot in understanding the true nature of Israel’s relationship with Washington. All Netanyahu’s predecessors – Labour and Likud – knew Israel’s place with the country’s most generous patron. Israel was a foreign state seeking the support of a global superpower. It had to observe the rules of that relationship and respect the powers in Washington accordingly. But this Prime Minister with Dermer by his side sees the relationship through the prism of their own American infused DNA, according them a place – by right – within American decision making.

John Boehner may or may not pay a political price for snubbing the President. But whatever does transpire, it will take place in the domestic sphere. Netanyahu and Dermer are using Israel’s relationship as a stake to be gambled with for their narrow political interests.

Israel’s relationship with the US has flourished in recent decades thanks to a sense of shared values as well as shared interests. When looking towards Israel, American Democrats and Republicans alike view a Middle Eastern version of themselves. They see a country founded by people fleeing persecution and in search of freedom. They see in Israel, dynamism, democracy, and self-reliance – all of which resonate across the political aisle in the US.

The US has come to share interests including: in contending with Iran, in dealing with Islamic extremism, and establishing some security from the rubble of the Arab Spring. Interests can and do change depending upon circumstances, and there are clearly some differences emerging in the mess of the current day Middle East between Israel and the US – most notably on Iran.

But shared values underpin relationships and carry weight that can be brought to bear in influencing behavior and shaping decisions. By casting in their lot so publicly with the Republicans, Netanyahu and Dermer threaten the solidity of the foundations upon which the US-Israeli relationship rests.

Current Israeli government policies are a further corrosive element. Settlement building in the West Bank – undertaken with gusto by Netanyahu – also eats away at that notion of shared values. There is only so long that Democrats and their liberal base can continue to believe that Israel is like them, when – in the absence of any prospects for a two state solution – Palestinians are denied sovereignty and basic rights alongside Israel. Provocations like going before Congress will only serve to remind many in DC of how much Netanyahu’s values are inconsistent with that of their American counterparts.

Bibi is coming to Washington to boost his credentials with Congressional Republicans and also to give himself a hand up in the Israeli election a few weeks later; it is for him and Ron Dermer a perfect mix and match of Israeli and American politics. But his over-familiarity with the US, risks breeding such contempt that it will drive a wedge between the Jewish State and its most important ally.